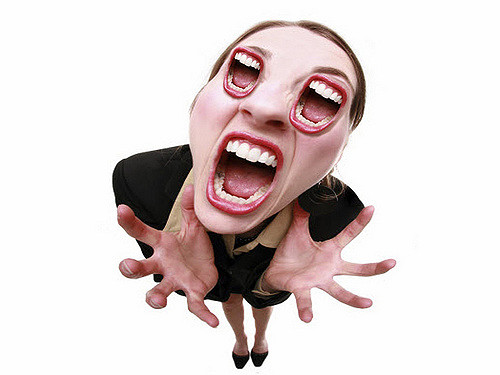 My wife has resting bitch face. It’s not a new thing like her face gradually started getting more and more bitchy with each passing year of marriage, it was always that way. The thing is until a few years ago society hadn’t agreed upon a term for her facial demeanor. It’s always been there, and it’s not horrible, it doesn’t make her scowl or anything but it does make her look weird and maybe that’s part of the attraction between us because I’m a serious guy most of the time and she looked like a serious woman when we met but I found out it was really just resting bitch face.

The reason I mention this is because sometimes I will look at her and, in a sing-song voice say “Whaaat’s Yoouur Probleeeeem?…” and most of the time I get a little chuckle or dismissal for being bothersome but today I got told to basically just “FUCK OFF!”. You would think that after being married for 20+ years I would have gotten the monthly cycles of womanhood down to some sort of time table where I would be able to instantly make the connection between mood and time of month. Nope, I am still the moronic husband who, in my opinion, gets unreasonably chastised by my wife and trys to mount a logical and reasoned defense against the injustice.

What does this have to do with bookmaking and running an online Pay per head website? I guess it is kind of the model for what a bookie wants in their player clients. A PPH website bookie wants a guy who continues to bet with him week in and week out losing goodly sums of money but believing that they are only one good week away from getting it all back and then some. Some players are like the husband who comes up with a great plan in his head but when he starts explaining it to his wife she shoots him down in flames.

More and more I am liking the expression “Are you high?” as a comeback to ridiculous conversations with people. Unfortunately I can’t use it much because I live in Costa Rica and the Spanish equivalent is “Estas drugada?” and it doesn’t quite have the comedic punch as the English vernacular. It’s the same reason I can’t watch the Simpsons in Spanish, it ceases to be funny in translation. Sorry Homer.

So we have the Super Bowl coming up and for many pay per head bookies it’s going to be all or nothing again, win or go home. The reason is that many PPH website bookies just don’t have the action to warrant a layoff bet. I mean what do you want to do with the last NFL game of the season, break even? For example if you cover the betting spread you win $5K, if you lose same deal $5K, where would you layoff that action and how much? I guess you could put yourself in a position to have $2500 in exposure but why? Bookies have to gamble too sometimes.

It’s time to man up and grow some balls if you are going to make it as a PPH website bookie. You will have to take some risks from time to time but remember that the best remedy to offset action in your package is with wager volume. Let your players bet every which way but sideways and then some and you stand a chance to make money each and every week. Also, remember that your wife is on the rag every month and will hit you with the most absurd psychological attack you can’t even imagine the insanity of it. When it happens don’t try to understand just say “blood moon time” and stay out of her way dumbass!