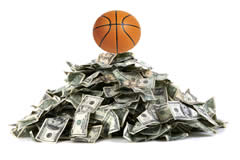 Bookmakers who use Pay Per Head agent services are quickly learning the ups and downs of players who bet on Football and Basketball Teasers. Available on both college and pro leagues, spreads and totals, teasers allow the player to adjust the line in their favor by 6 points, 6.5 points or even 7 points by combining the results on two or more games. Sweetheart or Super Teasers as they are sometime known, allow an even bigger adjustment by as many as 10 points on 3 games and 13 points on 4 games.

Teasers are one of those specialty wagers that local bookmakers who ran their own lines would traditionally not offer to players. One of the big benefits to using an offshore PPH sports office is that agents no longer have to worry about the agonizing process of grading all their own action. When you have hundreds of bet tickets sitting on your desk the last you want to do is perform payout calculations on multiple games at 2 am in the morning. However, some local agents are reluctant to dive into the teaser action. After all, who wants to give players an extra 6 points on a side or total when it seems tough enough to beat them on the official line!

Here is simple breakdown of how teasers actually work in your favor and why you should offer them to gamblers.

Teasers can be painful to deal with but just keep in mind that they are designed to give maximum leverage and for the majority of gamblers they are a sucker bet that will make you money!